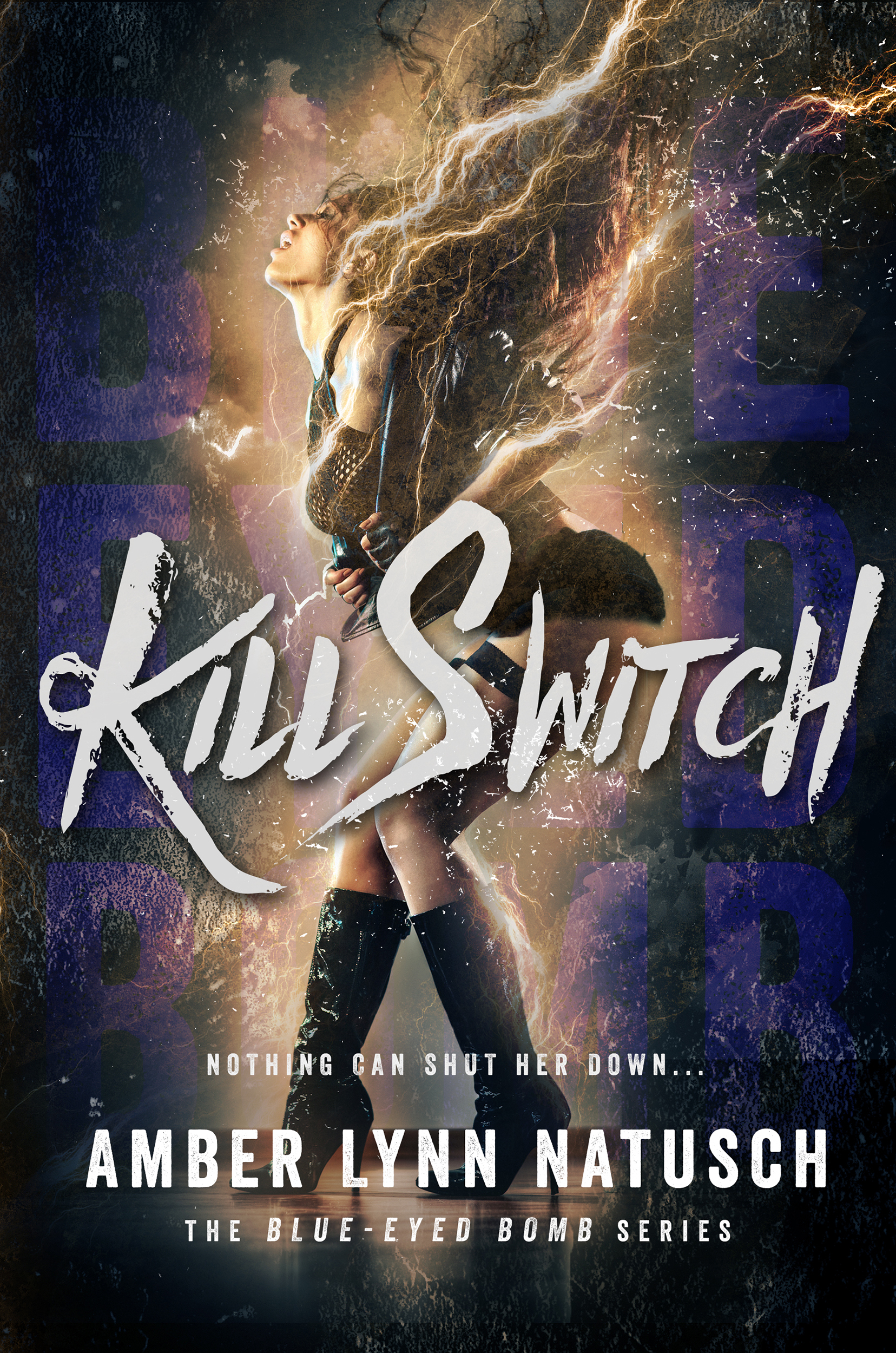 Part of the Blue-Eyed Bomb series:

NOTHING CAN SHUT HER DOWN…

As the daughter of two immortals, Sapphira was born with incredible power. Mastering it nearly cost her life, but with the help of her brothers, she was able to start a new life in Chicago, helping them police the supernatural community.

While tracking down a missing person, an unexpected accident unlocks a terrifying new power—the ability to experience the last few moments of a victim’s life. Following what she sees leads Sapphira, Nico, and Alek to more missing girls with special powers, and a growing realization that they’re running out of time. Will Sapphira prove to be the girls’ savior, or will a risky plan doom her to a similar fate…

I heard the screams in the distance and knew that he had returned for another. This time I could not remain silent. This time he’d struck too close to home.

“Helena!” I shouted, breaking through the gate to find her. I had to get to her before he disappeared. If he did, I’d never see her again.

As I sprinted down the street, the buildings flew past in my peripheral vision. I shouted her name repeatedly, praying I wouldn’t be too late. The PC had failed to come to our aid when I called for them. It was up to me to stop him. I was the only one that could. Everyone else had already succumbed to his powers.

Unfortunately for him, I wouldn’t.

With arms and legs pumping, I rounded the corner that led to the abandoned grain refinery. I could see an unfamiliar car parked in front of it. A slick, fancy black sedan that had no business being in a town like ours. It was his; I was sure of it. Helena hadn’t yet been taken. I still had a chance to save her.

I approached the building with care, knowing that he had already heard me coming. I’d been foolish to call for her, but I wanted her to know that she wasn’t alone. But in my silence, I became aware of hers. There were no sounds of a struggle. No more strangled cries. My chest tightened at the realization.

With a quickened pace, I stormed into the building. Broken glass crunching underfoot did nothing but announce my presence, but I didn’t care anymore. I knew his magic wouldn’t work on me. I just needed to let him close enough for him to find that out. Then the madness would stop.

Helena would be safe.

“Looking for something?” A smooth and seductive voice called to me from the darkness.

“So young. So foolish.” I could see his dark form dancing through the shadows just out of sight. Just out of range. “I can have whatever I want.”

“The PC is coming,” I said, my voice shaking slightly. “They know what you’re doing.”

A flash of darkness whizzed past me, blowing my hair back from my face.

“Do they now?” His voice was ice in my ear; it froze me in place. But not with magic. With fear. “But I have committed no crime…”

I could feel the press of his words against me, but unlike everyone else, they did not settle upon my mind.

“You have,” I said, inching my hand toward the blade tucked away under my jacket. “And it stops today.”

With adrenaline surging through me, I ripped the dagger from its sheath and swung my arm around, aiming to hack his head off. I knew it would take more than one blow, but the first would be enough to stun him. I’d gladly finish the job after that.

He parried my blow easily, wrenching my arm up behind my back at an impossible angle. The snapping of bone echoed through the empty building. Fear now replaced my adrenaline.

“You are right about one thing, my little null,” he whispered in my ear. “It will end today. At least in this town. Perhaps you’ll find comfort in that. Pity that you won’t be alive to see the fruits of your sacrifice.”

I bit down on my lip until it bled. My fate was sealed. I’d made sure of that when I’d underestimated him.

“Helena!” I screamed one last time.

Only silence answered my call.

“I will take good care of her. I’m sure she’ll love Chicago,” he said, letting go of my arm. His hands clamped down on either side of my face, lifting it up to face the far side of the room where my sister stood, cloaked in the moonlight that shone in through the broken windows. Her empty expression met my stare. Then, in a blur of motion, the room before me flew past.

A single, sharp pain shot through my neck.

Then the world went dark.

The present slammed into me like a rogue wave.

I scrambled back away from my brother Nico until I bumped into TS. While I tried to get to my feet, legs shaking, the two of them stared at me with wide eyes. Their disbelief, however, could not surpass my own. Whatever had just happened to me—whoever’s last moments I’d just relived—had blindsided me completely, leaving me a ragged-breathing mess in TS’ grasp.

“What the fuck was that?” I asked, barely able to force the words out. The victim’s adrenaline coursed through me as though it were my own, leaving me in a state of fight-or-flight like nothing I’d ever experienced.

“You tell me!” Nico countered, staring at me like I had three heads. His normally emerald green eyes had gone black as night. “One second I’m touching a teenage corpse, the next I’ve got your hands on me and I’m seeing everything he did before he died!”

“Did you think I knew that was going to happen?” His silence was answer enough. “Jesus, Nico. I’ve never done any of this shit before! I just wanted to see what you were doing and then BAM, I’m sucked into whatever hell that just was.”

“That was the kid’s death, Phira.”

“You mean that literally, don’t you?” He nodded, a grim expression overtaking his countenance. His normally olive-skinned face had gone pale.

“You and Alek have your empath gifts,” he explained, coming to stand before me. “Mine has always been to see flashes of memory of the victim at the time of death, but nothing like that. Ever.”

“Something happened,” I said, my voice soft and empty. “Something you didn’t expect…”

He nodded yet again.

“I’ve never experienced anything like that before. It was so real…like I was the victim.”

“I felt it too,” Alek, my other brother, said as he approached us. “But not the victim. I could feel the killer through the victim. Before today, I would get hints at a crime scene—residual energy left from the attacker. But now it’s like an energetic ID imprinted on my mind…”

“Holy shit. This is insane.”

“I think that your fully integrated abilities, Sapphira, now combined with your brothers’, have created an entirely new gift,” TS observed from behind me. “One that exploits your sibling connection.”

“I feel like ‘gift’ is a bit of a misnomer,” I replied dryly.

I looked down at the poor boy with the broken neck and wondered who had done this to him. He’d been so brave to go after his sister, a child against an unknown immortal. If it was true that he’d been a null, someone who could neutralize the supernatural abilities of others around him, then I knew we were dealing with a big bad for sure. Someone who would remain calm in the face of his powers being rendered useless. Unfortunately for the young boy at my feet, he couldn’t nullify his attacker’s strength.

“We need to find his people,” Nico said, pulling me from my thoughts.

“I will take his picture into town. It shouldn’t be long before we have an answer as to who he is. This is a small supernatural community. It would be impossible for him to go unknown here,” Alek said.

“Unless he isn’t from here,” I pointed out.

“Possibly, but that would mean his sister isn’t either, would it not?”

“You were screaming her name. You said who she is—or the victim did, to be more accurate.”

“It was difficult to watch you, Phira,” he added, his dark eyes narrowing. “When your head whipped around and you fell back, breaking contact with Nico, you just laid there for a moment as if you too were dead.”

“Yeah, I don’t think I like this little gift of ours, brother.”

“Agreed,” Nico chimed in, coming to stand beside me. The three of us hovered over the boy for a moment before TS found a piece of tarp to cover him with.

The boys started to walk away, prepared to search for the family, but I couldn’t leave him. Not yet. The guilt I felt as I stared down at the filthy blue plastic covering the young teenager was too great to handle. He’d called for the PC to do their job and they’d failed him. Failed him because of me. I was the reason that boy was dead, and the anger that brewed inside me with that knowledge was hard to contain. If it hadn’t been for my newfound other half, I don’t think I could have.

And that would have had dire consequences indeed.

“Channel what you’re feeling, Phira.” I felt TS’ arm wrap around my shoulders. He pulled gently to pry me away from the carnage at my feet. “I know you. You blame yourself for this child’s fate.”

“Shouldn’t I?” I snapped, wheeling around to face him. “Isn’t it my fault? The whole reason we came out to the Midwest was to investigate this community and we didn’t. Because of me.”

“You had to take priority.” His tone was plain as he said those words, but there was a fire in his rich hazel eyes that didn’t match the indifference in his voice.

“Tell that to his family for me, will you? I’d choke on the words.”

I walked around him toward the door of the decrepit building. I needed space from him and our nameless victim. I could still feel the fear he had felt when he’d looked across the room to see his sister standing there, her hollow expression haunting him for the few seconds before his death. His guilt at his failure only compounded my own. It was then that I vowed to do everything I could to do what he could not: save his sister. I owed him that much.

I looked back over my shoulder to find TS following me at a respectable distance. He knew what I needed in that moment. A lengthy lecture wasn’t it. What I needed was to get my wits about me and solve this homicide, and quickly. Whoever had committed this crime was about to get the reckoning of a lifetime. He’d fucked with the wrong girl when he’d so callously ended that boy’s life. He’d made this shit personal for me.

A decision I’d make him regret.