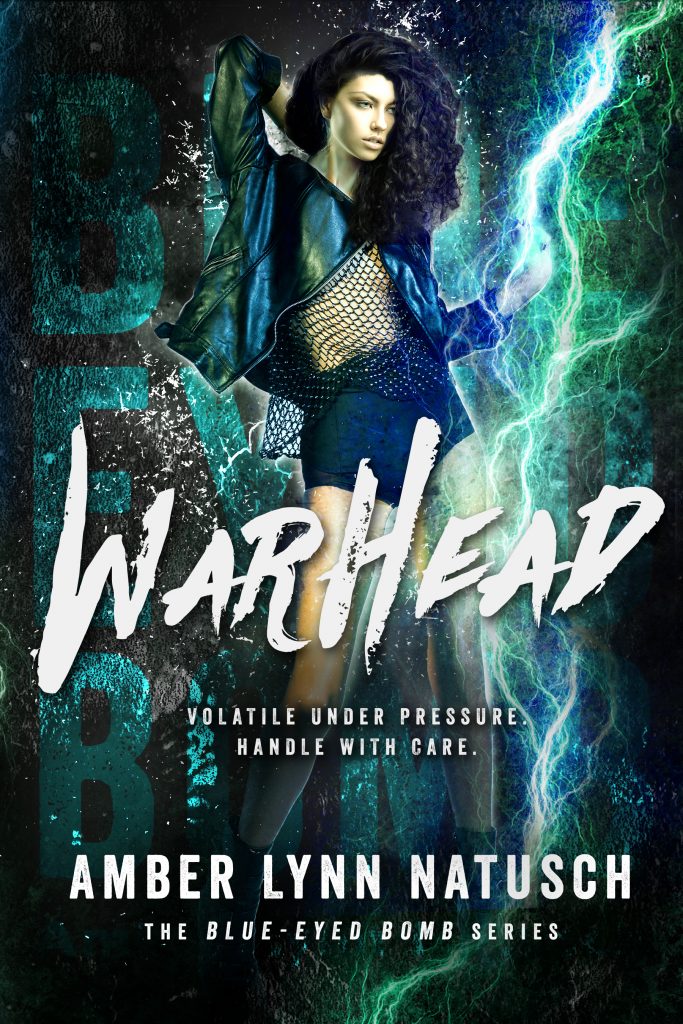 Part of the Blue-Eyed Bomb series:

VOLATILE UNDER PRESSURE. HANDLE WITH CARE.

The death of Chicago's Northside alpha is the kind of thing Sapphira has to cover up every day. But before she can calm the brewing discord in the city's supernatural community, another body drops into her lap—or more specifically, the lap of her best friend, Jenkins. When the only neutral territory in the city starts racking up a body count, it’s never a good thing. Especially when her ex-boyfriend is still trying to kill her and a creepy new ghost with an ancient book won't leave her alone.

Just another day in the life of the blue-eyed bomb—whose lies are about to bite her in the ass.

The ruckus above shook the building, casting dust down upon the prisoner until his black hair turned grey. Shackled to the wall with iron manacles and magic, he stared across the dark room to the staircase at the far end. The one from which the sound of footfalls approached.

Weak from lack of food and sun, he stood on shaking legs, doing all he could to appear strong in the face of an unknown enemy that had undoubtedly come to either kill or claim him. Neither was a fate he relished, but without a weapon to defend himself, either was likely if not inevitable.

As the footsteps grew louder, the pounding of boots on stone echoing through the room, a flicker of light from a torch illuminated his dank prison. Just before his would-be attacker rounded the wall, he saw the thing he cherished most sitting on a plain wooden table next to the stairs.

If he could somehow get to it, perhaps he could escape.

The shadow of a large figure fell deep into the room before the being himself strode in. He knew the intruder instantly, as well he should. That being was a warrior and the leader of the Patronus Ceteri, the sons of Ares, who policed his kind—policed all supernaturals alike.

The intruder stepped closer. “Do you know who I am?” he asked.

“You are Aniketos, leader of the PC.”

The dark-eyed man nodded his confirmation, amusement ghosting his expression. “I go by Sean now, but yes.”

“Do you know who I am?” the prisoner asked.

Another nod. “I have my suspicions.”

“Have you come here to kill me?”

Sean’s eyebrow quirked. “Should I kill you?”

The shackled one looked down at the state of his fading body. “Yes.”

“What if I were to sever the ties that bind you instead?” the leader of the PC asked, those dark eyes twinkling with a hue of emerald green.

“So you plan to kill the one who holds me captive?”

“What will you do with me once he meets that fate?”

Sean eyed the prisoner with interest. “I could use someone like you—someone with your particular gifts.”

The man strained against his restraints, a renewed sense of strength and hope coursing through him. “Free me and I am yours.”

Sean smiled. “But then you won’t really be free, will you?”

The prisoner’s eyes narrowed. “I will never be truly free.”

“True. However, I can offer you the closest thing to it. It will either be me or someone else—someone who won’t give you a choice in the matter. Someone unwilling to ever let you go.”

“Would you?” the prisoner asked, staring him down with suspicion in his hazel eyes. “Would you ever let me go?”

“If that was your wish, then yes, I would. But you will not want to. What I’m willing to offer, you would never receive from another.”

“I ask only for your allegiance to the PC—to serve it in all capacities without question—and nothing else.” Before the prisoner could answer, shouting erupted somewhere above them; the desperate cries of someone trying to escape slicing through the silence. Sean looked to the stairs then back, any shred of amusement in his eyes gone. “What do you choose?” he asked, his tone demanding. It was clear this offer that would not be extended again. The prisoner knew what would become of him if he refused—death was his only other option.

“Free me from this,” he said, lifting his shackled wrists, “and I am yours to command.”

A wicked smile crept across the dark-eyed one’s face. “I need your name first.”

“Atesh,” the prisoner said as the wails of a tortured soul rang out above. “My name is Atesh.”