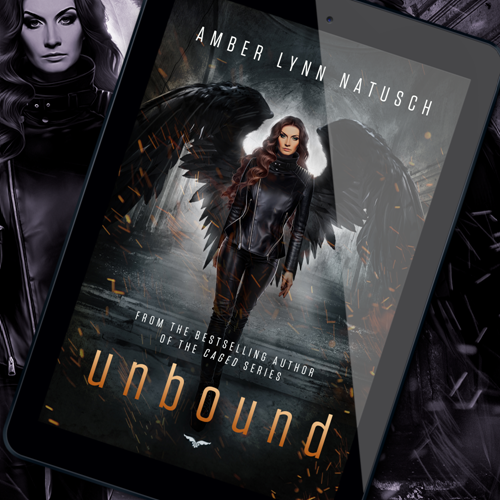 UNBOUND, the fifth and final novel in the Unborn series.

With an army immune to the god of fear’s manipulation at her back, Khara’s ability to defeat the immortal Phobos should no longer be in question. But an unexpected incident with her mother has left Khara’s powers compromised, and his time to strike grows near.

And only one can win.

This ever-changing story
Of the one who dare not fail,
Tasked with the near impossible,
No choice but to prevail

Only death and loss and torment
In the Always and Never hail,
These sacrifices paid in blood
For the one with souls for sale

While the evil in her rises,
A tipping of the scale,
The war between the light and dark,
Erodes the thinning veil.

Now fear has finally broken her,
The fierce heroine of this tale:
The Princess of the Underworld
And the Land Beyond the Pale

I awoke in a sea of darkness so complete it engulfed everything in existence, save for the hand in front of my body, coiled around a length of rope. The hand was my own; the rope remained a mystery. I tugged it closer, only to find the slack in it pulled tight.

Fist over fist, I followed the line through the eternal black, wondering if either would ever end. It felt as though I had been walking forever, destination unknown, and yet I knew I had to continue; knew there was a reason for this journey, even if I could not quite place it.

The further I traveled, the tighter my chest grew. Pressure from an unseen source bore down upon me as a light fog began to cloud my vision. The veil of aether swallowed me as I walked on, the darkness giving way to a suffocating cloud of grey. But that grey grew lighter with every step, and I knew I was getting close.

I could feel it in my bones.

Fear surrounded me as blinding light cut through the dullness, and I freed one hand to shade my eyes. The brightness before me began to solidify into a focused shape lying at my feet, and I slowly crouched next to it as my heart thundered in my chest. I had reached the end of the line.

With nothing else to do—nowhere further to go—I reached my hand out toward that blinding shape. My fingertips barely grazed the glowing aura that reminded me so much of my mother’s that, for a moment, I wondered if it was her. But the second they touched the ethereal nothingness, I knew it was not.

An unholy scream rang out and the shape wheeled on me, dark eyes peering through the light with a predatory stare. Fear like I had never known shot through me, and I stumbled backward. The hand that held the rope flew wide and released the line.

I hurtled through the jet-black cosmos with no way to catch myself, through the darkened emptiness that seemed to go on for eternity. The rope that had guided me was gone. But as fast as I fell, a pale, glowing shape appeared in the distance, gaining on me with every passing second. Soon it would be upon me, and my fate would be sealed.

“You cannot have me,” I whispered into the air rushing past me.

Another pained howl echoed through the black abyss, and my body slammed into something soft and familiar.

With a gasp, I shot up in bed and searched for the enemy with panicked eyes. All I found were Oz’s room in the Victorian to greet me and the Dark One himself perched next to me, staring.

“I found him,” I whispered, disbelief thick in my tone. “He who shall not be named…”

“Where?” Oz’s black wings shot wide around us to fight an enemy that was not there.

I contemplated his question for a moment, brow furrowed. Because, in truth, I did not know the answer, and yet I did. I could not name it, though I was certain I could find it again. The nothing was most definitely a something.

The Dark One swore. “More riddles,” he growled as his wing formed a protective arc around me. It was such a subtle gesture that I wondered if he was even aware of it, or if his concern regarding Phobos had caused him to act without thought. Because he knew all too well the threat the fear god posed to me. To us all.

And he was most definitely coming.